The symbol of cold war- the Berlin Wall separated communist East Germany from democratic West Germany. However, this iron curtain fell on the November 9, 1989 uniting the two Germany. But how much do you really know about the Berlin Wall?

Here are 10 things you might not know about the Berlin Wall.

#1.  The fall of wall happened by mistake

It all happened by a wrong announcement by East German politburo member Gunter Schabowski. In an interview he mentioned that restrictions on travel visas would be lifted. Upon further probing by the media, he grew more confused and media reported that border crossings had opened the Berlin Wall.

#2.  The Wall was erected more than 15 years into the cold war

Between 1949 and 1961, more than 2 million East Germans fled to West. The Eastern side had made a request to the Soviet Union to erect a wall in 1953 which was rejected. But with regular defections, a wall was finally erected. It started with barbed wire fencing being put in place on August 13, 1961. A few days later, the barrier was fortified with concrete.

#3.  It was actually made of two walls 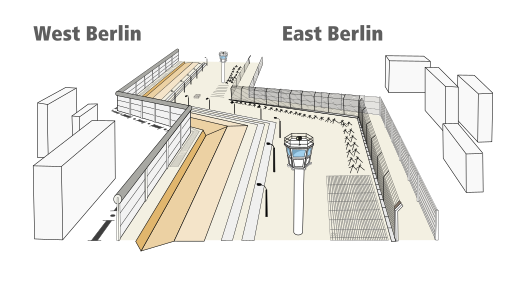 The Berlin Wall was actually two walls. There were two concrete walls separating East and West Germany. The 160-yard distance between the two walls was known as the “death strip”. It contained guard dogs, numerous watchtowers and trip-wire machine guns.

Official figures show that over 100 people died while attempting to cross the wall. People who attempted to move West from East were regarded as traitors and border guards were instructed to shoot them.

#5.  Over 5000 people escaped by going under and over the Berlin Wall

Just when East Germany had sealed the border, a 19-year-old border guard Corporal Conrad Schumann leapt over a 3-foot-high roll of barbed wire. As the wall grew more elaborate, so did escape plans. There were secret tunnels and some people even crawled through sewers. There have been incidents of spectacular escapes.

Although November 9, 1989 is known as the day the Berlin Wall fell, official demolition didn’t come until 13 June, 1990. During this time gap, border control still existed but was little less strict than before.

East German government claimed that that wall was actually meant to keep western spies, fascists and ideas out rather than keeping the East Germans in.

On the surface, the wall was erected in order to prevent East Germans from entering West Germany. However, it wasn’t much of a restraint for the West as they were still able to enter East Germany by obtaining a permit in advance. The Western side didn’t oppose the wall as it indicated that the Soviet was not interested in taking over West Germany.

There were various crossing points even while the wall was up. One such point was Checkpoint Charlie. It is now a world- renowned part of the barrier. The nickname as given by Western Allies.

The western side of the wall had graffiti. But there was no graffiti over the communist Eastern side.

Coca-Cola can work as a substitute for toilet bowl cleaner