Every last Wednesday of August, the town of Bunol comes together to throw tomatoes at each other. La Tomatina! The world’s biggest food fight is celebrated with much enthusiasm in the town of Bunol in Spain. Overtime, the festival has gained popularity in various parts of the world and you can see tourist flocking to Spain in August.

Here are 5 fun facts about La Tomatina or the most awaited Spanish festival.

#1. It originated from a street fight 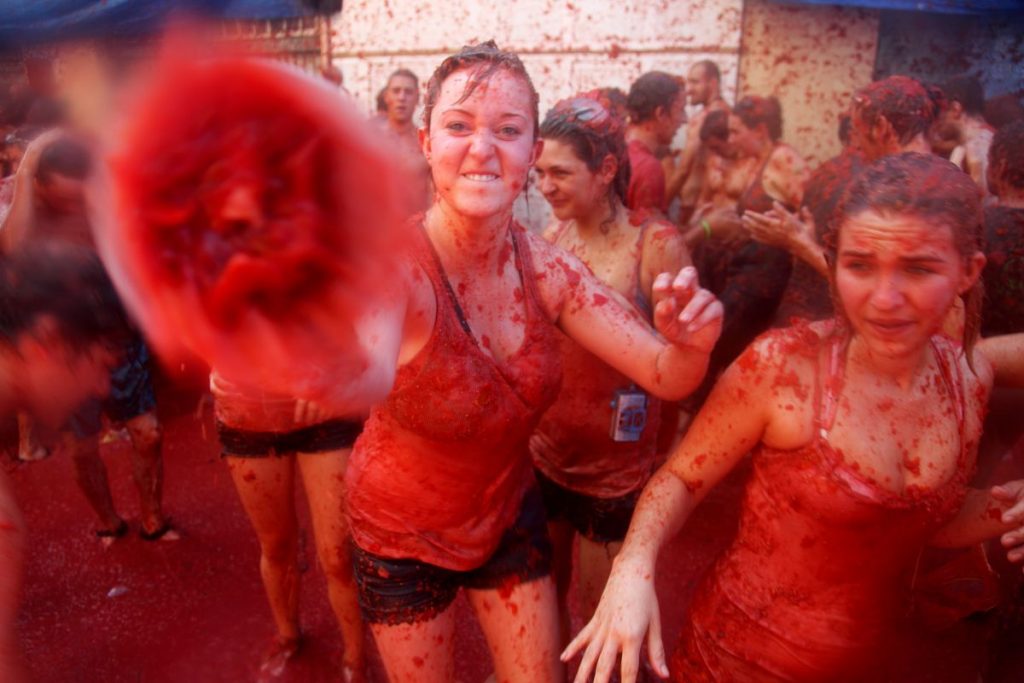 It is said that this tomato throwing festival has its roots in a street brawl that ensued in 1945.  Some young boys started throwing tomatoes at a person who accidently fell in the vegetable market. This led to a whole bunch of people doing the same until the police broke them up. The following year, they picked up a fight on purpose but brought their own tomatoes. Once again, the police broke it up but the tradition soon caught up. It was banned in the early 1950s but the wishes and tradition of the town’s people brought the festival back, albeit in a more regulated manner.

#2. A slice of ham marks the beginning of the festival

It may sound strange but the festival is marked with retrieval of a slice of ham that is hung from the top of greasy pole. Every year, a slice of ham is hung on such a pole in the town square. Participants have to climb up and retrieve the piece of ham while being showered with water hoses. Once the ham drops, a loud signal goes off and you can see the madness and fun hat ensues. 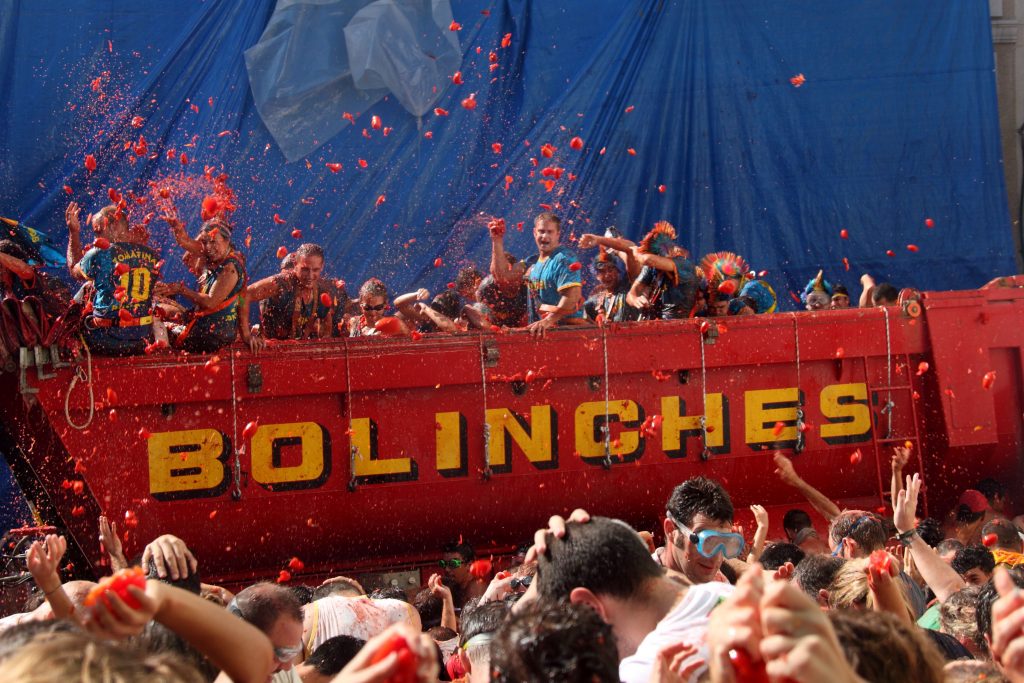 The world’s biggest festival draws people in huge numbers who also require lots and lots of tomatoes. Over 90,000 pounds of tomatoes are used in the festival which are collected from all parts of Spain. Red and fresh tomatoes are specially reserved for this entertaining festival. However, these tomatoes are squeezed first so that they don’t hurt while they are being thrown around. The festival also has other elements of Spanish culture such as bull fights and horse riding.

#4. La Tomatina has spread across the world 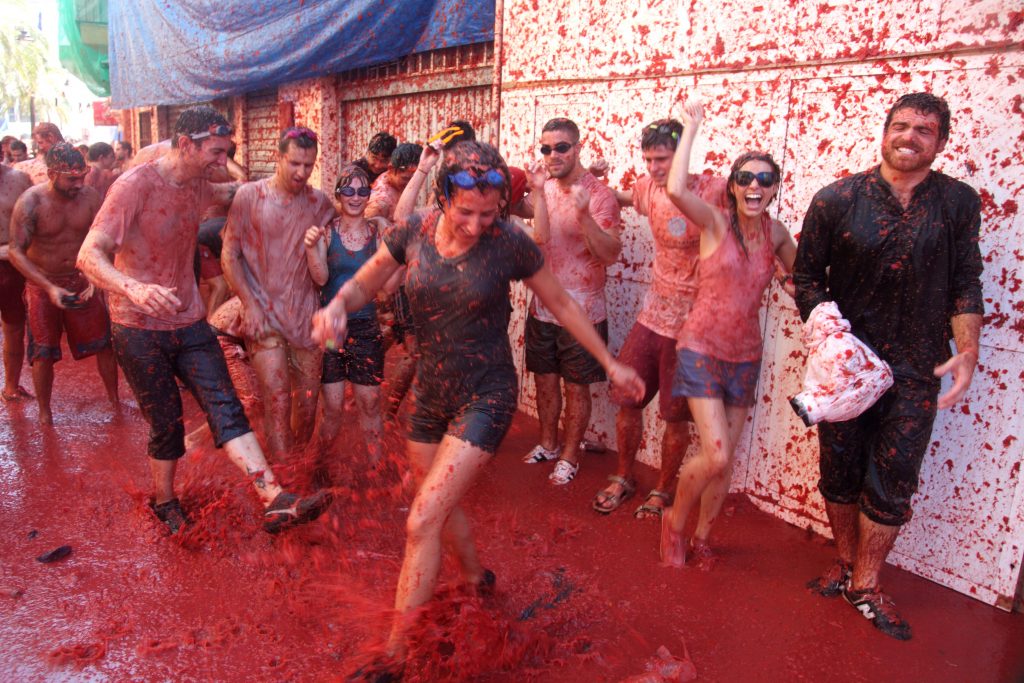 Not only has La Tomatina attracted thousands of tourists to Spain, it has also been adopted in various other parts of the world. Similar food fights have been organized in cities such as Columbia and Chicago. However, their model didn’t work as it was called a ‘wastage of tomatoes’. The festival drew criticism from the citizens. But Spain is the only country that has successfully hosted this festival for ages. 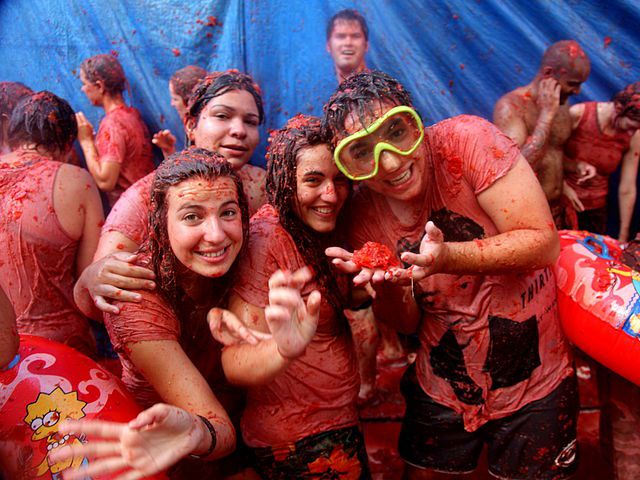 After the tomato fighting has ended, fire trucks are called to wash off the streets. The participants clean themselves either head to public showers or enjoy the rain dance created by neighbourhood hoses. Once the entire red paste has been washed away by fire trucks, the streets look remarkably cleaner. This is because tomatoes are acidic in nature and act as disinfectant to clean the streets.