It is true that the modern generation thinks so advanced than their predecessors both scientifically and rationally too. Here is a great evidence for this fact, a young girl in china sees things from a totally different perspective altogether. She has saved the life of a youth that was about to suicide from a high raise recently, just with a single kiss. Yes, this youth was threatening everyone in the public while hanging from a barrier saying that he is going to jump from there to commit suicide. Still while no one paid heed to his blabber, this little young girl was disturbed and well wanted to save this guy who is risking his life for nothing.

When the policemen could not negotiate terms with him to bring him down this little girl asked the cops to give her a chance to talk to him and she could be able to sort it out in one peace. The policeman paid heed to her promising words. They kept their belief in the girl’s words, for she explained things to them in such an assuring tone. Yes it worked for real. She was given the permission to talk to the youth and the youth responded to her shout if he is willing to talk to her as well. 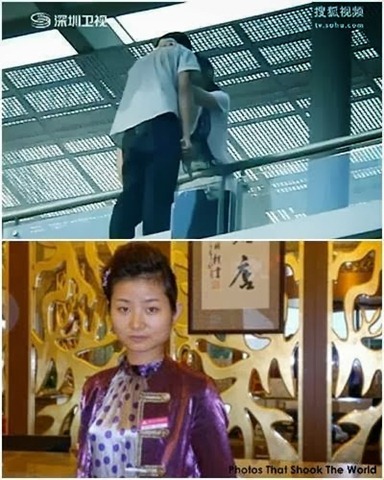 She was asking him the reason for his dejected proposal to commit suicide. The youth replied that he is from a broken family and none of his desires were accomplished all now. Life is full of struggle and he is not able to make it enjoyable by any means either. Instead of struggling too much he decided to give it up once for all. When he narrated all his story in such a pathetic and touching way, the girl listened to all this narration and replied in turn saying that she is also from similar such situation.

She explained that she is also coming from a family that is broken and have a lot of things to worry about. Distress is part and parcel of her life as well. Saying this, the youth felt an affinity for her, and taking advantage of that, she moved closer towards him, to kiss on his lips, when he was entangled in the kissing moment, the cops came by the other side, to pull him down from the dangerous situation.

He was rescued and a life is saved out of a single kiss. The girl was appreciated for her noble deed by one and all of the people over there. A kiss, an affectionate one, can really melt down the hearts of the humans for sure. Love is something that people are longing for, and when you truly understand the need to love each other then there is least problem in the material world, for sure.

Many educated individuals too do not understand the basic needs of love and affection and start to show a lot of repulsive behavior to the others in the community who are downtrodden and insane. Such things should change seeing incidents of the real kind like this one. Love all and serve all.

Doctors many-a-times are considered as gods. They save lives, give people a second chance, one might say that they totally deserve the title. But...
Read more
- Advertisment -

5 Things that processed food is doing to your body