Since ages there have been some objects that not just bring bad luck but even death. Some of these cursed objects have been put away while some are displayed in museums and one thing is certain- they are creepy and terrifying. Take a look at these 10 cursed objects throughout history.

You know what Thomas Busby did to his father-in-law for sitting in his chair? He strangled him and when law meted out justice to him in 1702, he cursed his chair so that nobody could sit on it. Apparently, 63 people sat on it and met untimely deaths, even within just a few hours of sitting on this chair.

This doesn’t need any introduction if you have watched the movie and if you haven’t, it is suggested you better watch it. The creepy doll is possessed with the spirit of a girl named Annabelle and is being used by a demon as a conduit to hell. The doll now rests in a glass case in Warrens’ Occult Museum and it still moves!

Italian artist Giovani Bragolin painted a picture of a crying boy which became very popular and people bought copies of it. Apparently, a fireman claimed to find these pictures in all the houses that caught fire with the painting intact. The news caught on and people stopped buying that painting.

Over 1.1 billion years old and worth $200- 250 million, the Hope Diamond causes great misfortune and misery to whoever wears it. One of its wearers was ripped by dogs and another by French mob. It now reside in Smithsonian Natural History Museum.

The 15th century silver Italian vase was uncovered in 1988 along with a note inside which said “Beware, this vase brings death”. whoever bought this vase died including a pharmacist, a surgeon, and an archaeologist. The vase was then seized and buried again.

Egyptian pharaoh Tutankhamun’s tomb is one of the most popular cursed tombs in history. It is said that whoever enters there will be struck by illness, death or bad luck. Since 1935, over 20 deaths have been claimed by this tomb.

As if the Myrtles Plantation wasn’t haunted enough, a mirror there is considered cursed. It is believed that the mirror contains the souls of Sara Woodruff and her children who were poisoned by a slave named Chloe. Guests at plantation have said to witnessing figures in the mirror and a child’s hand print. 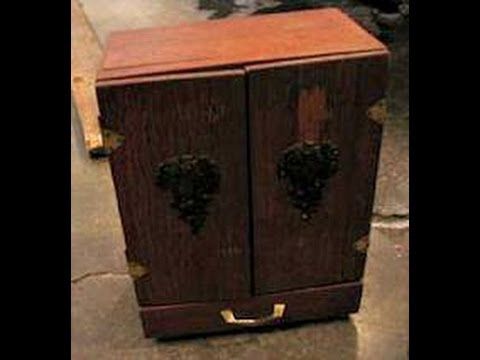 A dybbuk is an evil spirit according to Jewish folklore. Apparently, a Holocaust survivor accidentally summoned a demon via an ouija board and then trapped him in a wine cabinet. Somebody bought this wine cabinet and then started having nightmares. He gave this to his mother who had a stroke the same day. Whoever has owned this box has reported to having demonic nightmares.

There is definitely something creepy about dolls. Robert the doll was a handcrafted replica of its owner, Robert Eugene Otto. When left unsupervised, people have claimed to hear footsteps, giggling and some movement from this doll.

The haunted dress of Anna Baker continues to intrigue people. Baker, coming from a wealthy family fell for an iron worker and could not get married due to her father. She spent all her life angry and never getting married. The dress has been put on display in an airtight case and it is said that it moves on its own sometimes.